Under and Over the Moon in the Italian Language 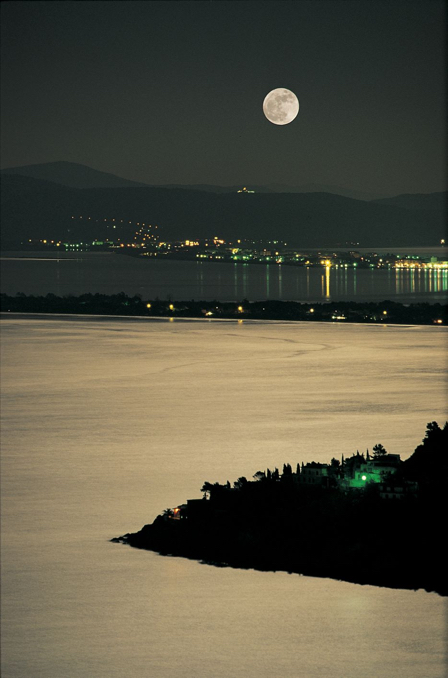 “Why do you keep going back to Italy?” a curious friend asks

“For the moonglow,” I reply, only half-joking. I could have answered with a single melodic Italian word: gibigiana (spelled in various ways, including gibigianna). I learned it only recently, from an Italophile as besotted as I by the reflected moonlight (chiaro di luna) on the Tyrrhenian sea off the Tuscan coast.

An Italian dictionary defines gibigiana as a “balenìo di luce riflesso dall’acqua o da uno specchio” (flash of light reflected from water or from a mirror). Considered old-fashioned and little used (poco utlizzata) in modern times, it dates back to the fairy tales grandmothers (nonne) once told about a gianna (witch or fairy, a word derived from the name of the goddess Diana) or a giubiana (ghost).

While gibigiana comes from the Lombard dialect, other regions use different expressions to capture this sparkling effect:  fare specchietto (make a little mirror) in Lucca, bagliore (glimmer) in much of Romagna, indovinello or illuminello (riddle or puzzle) in Pisa and Livorno, la veccia (the old woman) in Piedmont,  lo spirito folletto (the hobgoblin or elf) in Modena.

Italian designers refer to a certain style of lamp as a gibigiana. Film-makers use the term for a device placed in front of a light source as a filter. In slang gibigiana colorfully describes a woman who dresses in a “flashy” style—glittery rather than elegant.

Gibigiana is only one of the magical powers of una luna italiana. Equally impressive is the rising of una luna rossa (a red moon). Scientists explain this as un’illusione ottica (an optical illusion) that occurs when the moon is bassa sull’orizzonte (low on the horizon).

La luna, which can be nuova (new), crescente (waxing) or calante (waning), doesn’t just appear in Italy's night sky. Someone with extravagant wishes is said to chiedere la luna (ask for the moon). Italians refer to a fetus as being ancora nel mondo della luna (still in the world of the moon or not yet born).

Some folks are so absentminded or detached from reality that they seem to vivere nel mondo della luna (live in the world of the moon) while others are in such bad moods that they avere la luna storta (have the crooked moon). In hard times people find themselves struggling to sbarcare il lunario (make ends meet).

An Italian lunatico may be temperamental but isn’t necessarily as wacky as an English lunatic. But do watch out for anyone who tries to fare vedere la luna nel pozzo (make you see the moon in a well). He’s just stringing you along. And you certainly don’t want to end up doing as the local dogs do: abbaiare alla luna (barking at the moon—or exerting yourself in vain).

Photo: Giovanni Rinaldi, from the Argentario looking toward the town of Orbetello

← Coming in 2019: A 10th-Anniversary Edition of La Bella Lingua Celebrating Italian Cooking in the World →
FOLLOW BY RSS