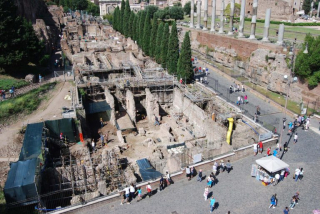 The Excavation of the Palatine

Some describe Roma as a plate of archaeological lasagna (un piatto di lasagne archeologiche), made of layers upon layers of history (strati su strati di storia). Clementina Panella, a professor of archaeology at the Università di Roma “La Sapienza,” views it as a great book of human history (un grande libro di storia dell’umanità). After thirty years of excavations, her team is uncovering the first pages (le prime pagine) of this remarkable story.

The oldest traces (le tracce più antiche) date back to simple huts built in the tenth to fourteenth centuries B.C. (A.C. for Avanti Cristo, before Christ, in Italian). Panella’s dig has centered on the swath of land between the Colosseum and the Arch of Constantine, the very heart of ancient Rome.

This “importantissima” zone, never before explored, has yielded discovery after discovery (scoperta dopo scoperta). The most significant is the Curiae Veteres, a vast religious sanctuary where Romulus gathered representatives from Rome’s districts (curiae) to worship and eat together (mangiare insieme). As animal bones (ossa animali) testify, meat was definitely on the menu.

For Panella, another exciting discovery was the Meda Sudans, a monumental fountain (fontana) built by Augustus, Rome’s first emperor. Nearby the archaeologists found a luxuriously decorated domus or residence believed to be the place where Augustus was born in 63 B.C. His wife Livia converted it into a temple after his death in 14 A.D. (D.C. for Dopo Cristo, after Christ, in Italian).

Among the intriguing findings, tucked inside a collapsed wooden box, were these insignia— scepters not unlike those of a Harry Potter wizard, topped by gleaming glass globes, as well as spears (scettri) and lances (lance) for bearing flags — from the 4th century A.D. “We believe they belonged to Emperor Maxentius and were hidden after he was killed by Constantine in the Battle of the Milvian Bridge in 312 A.D.," says Panella.

Especially touching—and unexpected—was an urn from the fifth century B.C., buried in shallow ground under a protective overhang. Inside, wrapped in a covering

of sorts, were the remains of a baby who may have died at or shortly after birth. Panella describes the revelation as “molto impressionante” (very startling), a poignant reminder of the timeless sorrow of a child’s loss.

The city’s version of urban recycling has often been a challenge. “Roma si mangia,” Panella says. (Rome eats itself.) From the earliest days, builders took stones, metals, glass and decorations from existing structures to construct new buildings. As Panella’s team discovered, some used statuary, such as a marble bust of Emperor Septimius Severus, who died in 211 A.D., as “filler” for the foundations of new edifices.

Working among the glories of ancient Rome has been “un gran privilegio” (a great privilege),” says Panella. “I lift my head, and I see the Colosseum, the Arch of Constantine, the temple of Venus.” Most rewarding has been the thrill of discovery, “of finding something that has never been seen before, trying to interpret it in light of what we already know, and adding another element to an extraordinary story.”

“This excavation allows us to reconstruct 3,000 years of history,” says Tracy Roberts, vice-president of LoveItaly.org, a nonprofit association that has launched a crowdfunding campaign to enable Professor Panella to complete her research. “By contributing, you can become part of the history, not just of Rome or Italy, but of all humanity.” For more information on the Palatine excavation, check out LoveItaly’s website.

Dianne Hales, shown here with Professor Panella and a marble bust of Emperor Septimius Severus,  is the author of La Bella Lingua: My Love Affair with Italian, the World's Most Enchanting Language and Mona Lisa: A Life Discovered.

Click below for a video on the Palatine dig.