How It Goes in the Italian Language 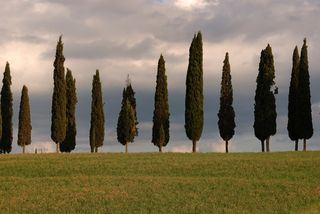 “Va bene” are two words you hear every day in Italy. Va translates as  “goes,” the third-person singular form of andare (to go); bene means well. Anyone you encounter—waiter, sales clerk, concierge, driver, guide—may ask, “Come va?”  (How’s it going?)  If everything’s going well, you respond, “Va bene!”  If things are not just good but great, you can say, “Va benissimo!”

Things can go a lot of ways in Italy: contro (against), avanti (ahead), indietro (backwards), a rotoli (downhill or to the dogs), or a male (rotten, as in food that spoils).  If something appeals to them, Italians say that it va a genio or a fagiolo (goes to their genius or to their bean).  If they’re absolutely crazy about it, they vanno pazzi (go crazy).  Something that becomes very popular or fashionable va molto (goes a lot).  A friend asking  “ti va…” wants to know if you fancy or feel like doing something.

Italians vanno a piedi (go by foot) or vanno in bicicletta (bicycle) in daily life.  Other destinations are figurative. When Italians die, they “vanno ai cipressi” (go to the cypresses or tall trees, which often grow near cemeteries).  Another destination that angry Italians still send their enemies to is “l’inferno” (hell).  Less vulgar alternatives are  “vai al diavolo!” (go to the devil) or “vai a quel paese” (go to that country).  Or you could vai a zonzo (go nowhere).

To this day, the phrase andare a Canossa (“to go to Canossa”) means to humble one’s self in a dispute. It dates back almost a millennium to the year 1077. At the time a remarkable woman, the armor-wearing, horse-riding Matilda, gran contessa of Tuscany, ruled over a vast state in central Italy from her castle at Canossa. After years of conflict with Pope Gregory VII, the German king Henry IV crossed the Alps in winter to appear outside its gates as a barefoot penitent seeking absolution from Matilda’s papal guest.  Gregory kept the emperor waiting three days below the snow-swept castle before agreeing to see him.

The lesson the once-arrogant ruler learned is captured by an Italian proverb: La superbia andò a cavallo e tornò a piedi. Pride went out on horseback and came back on foot.

a lungo andare — in the long run

← Italish "Making It" in the Italian Language →
FOLLOW BY RSS