Valentine’s Day in the Italian Language 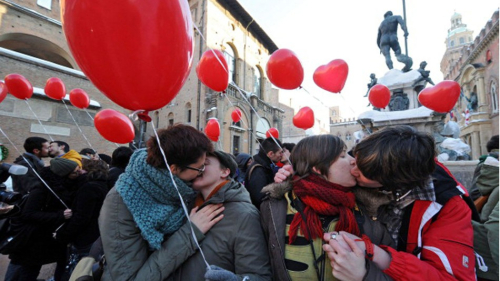 The Feast of the Enamored  (Lovers’ Day)

The Roman empire  began with a tale of love—or, more accurately, lust—almost three millennia ago. The libidinous god Mars, smitten by the beauty of a Vestal Virgin, snuck into her temple in the town of Alba Longa to sleep with her.

When the disgraced Vestal gave birth to twin boys, remarkable for their size and beauty, the evil tribal king ordered the infants thrown in the Tiber. The cradle containing the babies drifted downstream and washed ashore at the base of the Palatine hill.

According to legend, a lupa (she-wolf) suckled the twins Romulus and Remus. However, their nursemaid may well have been human. Lupa was slang for prostitute, and brothels were called lupanari. Several years ago archaelogists unearthed the lupercale, the sacred cave, decorated with seashells and colored marble mosaics, that may have sheltered the twins and served as a shrine for their worship.

For centuries in this cave, on every February 15, Romans celebrated a fertility festival called the Lupercalia with the sacrifice of a goat. Priests sliced the goat’s hide into strips and dipped them in the sacrificial blood. Boys would run through the streets, gently slapping women with the goatskin strips to enhance their fertility in the coming year.

Later in the day, all the young unmarried women in the city would place their names in a large urn. Rome’s bachelors each selected a name and became that woman’s sexual partner for the year in a sort of trial union that often led to marriage.

As it grew in power, the  Catholic Church abolished this pagan practice but created in its stead the most romantic of saints’ days on February 14 to honor a martyred priest named Valentino. Although historical accounts differ, Valentino seems to have served in Rome in the third century A.D., when Emperor Claudius II outlawed marriage for young men because he believed that bachelors made better soldiers. Valentino, sympathetic to young lovers, defied the decree and continued to perform weddings.

Arrested and tortured, the tender-hearted saint developed a friendship with a young girl—perhaps his jailor’s daughter—who came to visit him. Some say they fell in love; others claim that he cured her blindness. Before being beheaded, the saint sent her a note that he signed “il tuo Valentino" (your Valentino).

Lovers around the world have been using the same phrase ever since. In Italy, which has not commercialized Valentine’s Day as much as the United States, couples celebrate with una cenetta intima (a romantic or intimate dinner) and flowers. However you celebrate this happy day, I wish  you and your sweetheart a buona festa degli innamorati!

Sweet Sayings for Your Valentine

Ti amo da impazzire/morire/alla follia – I love you to go crazy, to die, to madness

Voglio soltanto te –- I want only you