Naming the Wind in the Italian Language 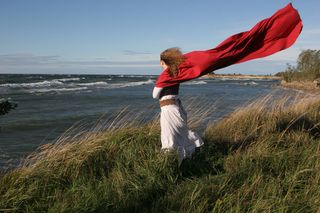 Si è alzato il vento.  The wind has risen on the northern California coast,  gusting to more than fifty miles an hour. Watching trees shake and white caps scuttle across the bay, I think that a wind like this deserves a name. In Italy, il vento might have one of eight different names:

*La Tramontana–north, from the Latin expression intra montes or trans montes (beyond the mountains) referring to the fact that this wind blows from the Alps

*L'Ostro (or il vento di Mezzogiorno)-–south. from the Latin  auster for south

*Lo Scirocco–-southeast, from the Arabic word shulùq, wind from the south

Many curse the Scirocco, which carries red sand from Africa, as a misbegotten wind that brings bad weather and aggravates aches and pains.  In the summer Romans welcome the refreshing breeze of the Ponente while residents of sweltering  inland cities like Bologna must farsi vento (fan themselves) and hope for a venticello (gentle wind) or una brezza (breeze).  In winter Trieste shivers in the strong wind its residents call the Bora, from the Greek for north, a cold wind that chills to the bone.

At sea sailors try to avere il vento in poppa (to have the wind behind them) for smooth sailing.  But often they have to contend with a vento di prua (a headwind) or andare contro vento  (to sail against the wind). At times, on sea or land, anyone can end up in balia del vento (at the mercy of the wind) or perdere la tramontana (lose one’s bearings).

“Qual buon vento ti porta?” (What good wind, or fortune, brings you here?” I’ve heard Italians exclaim at the sight of an old friend.  At times of triumph and joy, they want to gridare ai quattro venti (scream to the four winds or shout from the rooftops).  In other circumstances they may find themselves parlare al vento (speaking in vain) or predicare al vento (preaching to the wind).

A classic Italian proverb warns, "Chi semina vento raccoglie tempesta" (those that sow the wind shall reap the storm — people who make trouble  will eventually suffer the consequences).  Others may “combattere contro i mulini a vento”  (fight or tilt at windmills)

But be careful about what you say about windy weather. The Italian phrase for “it’s windy” is “tira vento” (literally it’s pulling wind).  Ventoso can be translated, not just as windy, but as conceited—or flatulent.  And someone pieno di vento (full of wind) is a windbag.

Via col vento — italian  title for   “Gone with the Wind”