Celebrating a Year of Italian Language and Culture: Verdi 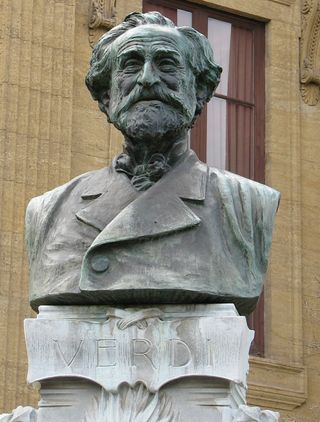 As part of the Year of Italian Culture (l'anno della cultura italiana), Italy is celebrating the 200th birthday of Giuseppe Verdi–fondly nicknamed “Peppino”–the Michelangelo of Italian
opera.  In more than thirty operas,
this maestro of maestri gave “Italians” a unifying language and helped
meld the patchwork of independent states and occupied territories into a
unified nation.

The son of a poor
tavern-owner in  Emilia-Romagna,
this musical prodigy  became the
village organist at age 12 .  As a
young man, he fell in love with the daughter of his first patron, married,  had two children, and wrote two operas (one cheered and one booed at Milan's prestigious Teatro alla Scala.
Then, in the span of three tragic years, Verdi’s children and cherished wife
died.   He swore never to compose  again.

One night an impresario in
Milan shoved a rejected libretto into Verdi’s hands. Alone in his room, he
threw the manuscript onto a table. “Without my knowing why,” he later
recalled,  “I found myself staring
at the paper in front of me and saw these verses: “Va, pensiero, sull’ali
dorate.” (Go, thought, on golden
wings.)  He was so intrigued by the
phrase from the biblical story of Egypt’s Hebrew slaves that he couldn’t sleep.

The libretto became the
opera Nabucco, which
premiered in 1842. Its poignant chorus, “Va, pensiero,”
the lament of the enslaved captives longing for their homeland, became
an unofficial anthem for Il Risorgimento, the resurgence, a nationalistic movement that was sweeping the
fragmented peninsula.

“The tune made him, then
and for all time, the singer of his people’s liberty,” wrote an early
biographer. The  day after Nabucco opened, people were singing the song in the
streets. As nationalism grew, its advocates shouted,  “Viva V.E.R.D.I.!”—not only in homage to the composer, but as an abbreviation for “Victor
Emmanuel Re D’Italia,” the
Piedmont king who promised to liberate Italy from its foreign occupiers.

Verdi insisted on strong
situations, strong emotions, strong contrasts, and the strong language he
called parole sceniche,
dramatic words “that carve out a situation or a character.” What were le parole sceniche
of  his life?  Croce (torment), for sure, caused by crushing
losses.  Delizia (delight) in a  half-century-long relationship with the soprano Giuseppina Strepponi that scandalized his
hometown.  Vendetta? Verdi’s operas vibrate with hate-fueled vengeance, and he
held fierce grudges for decades.

Verdi’s genius glowed long
and bright. He composed Otello
at 74 and Falstaff at 80. On
January 21, 1901,  at age 88,
Verdi,  whose music seemed  as vital as air to generations of
Italians, died.  At the cemetery,
Toscanini led a chorus of more than 900 singers in “Va, Pensiero.”
Without prompting, the entire crowd joined in the chorus  that had helped forge a nation. To listen to this stirring
tune, click below.

Words and Expressions
from Verdi operas

Dianne Hales is the author of La Bella Lingua, My Love Affair with Italian, the World's Most Enchanting Language.

← Come Write, Cook, and Enjoy Capri with Me! Naming the Wind in the Italian Language →
FOLLOW BY RSS