Walking Venice in the Italian Language 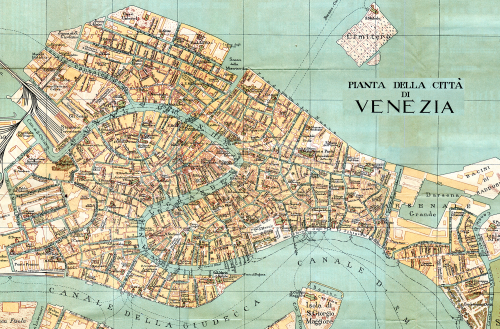 Without cars, buses or other vehicles, Venice is a pedestrian paradise—until you get lost. As I discovered on a recent visit, you need more than a map to navigate the Venetian labyrinth: You need a new vocabulary.

As in other Italian cities, you will find a piazza—but just one, Piazza San Marco, which Napoleon called the finest drawing room in Europe. Venice’s smaller piazze are called campi (for the fields they once were). My guidebooks count 135 campi, 380 corti (small  courtyards inside residential complexes) and 196 campielli (tiny piazze). While strade e vie (streets and roads) crisscross other Italian cities, Venice has just one of each: Strada Nuova and Via Garibaldi.

Instead it boasts some 3,000 calli (from the Latin callis for path). A Calle Longa, Lunga, Larga or Stretta usually serves as the “spine” of a neighborhood in Venice’s six sestieri (districts). Smaller walkways called rami (branches) lead from the calli to a jetty, a corte–or a deadend.

The “main” streets of Venice, lined with shops, banks and businesses, have names of their own, such as salizzada or salizada, originally used for a paved street; ruga, the same as the Italian word for wrinkle; and merceria, from the Italian for a haberdashery or draper’s shop.

When he arrived in Venice, the every-witty Robert Benchley cabled: "Streets Full of Water. Please Advise." Of Venice’s 400 waterways, only three qualify as true canals navigable by larger boasts: Grande, Cannareggio and Giudecca. Rio is the name for a smaller inlet; a pedestrian street running along a rio is a fondamenta. But if it's a waterside promenade, it may become a riva, as in the Riva degli Schiavoni, which refers to the Dalmatian Slavs who once settled there.

On even a brief stroll, you may find yourself going under buildings and over water. A sottoportego is a tunnel of sorts constructed to connect a calle, corte, fondamenta or campo with another one. Some change direction along their route, mystifying visitors who may feel they are walking in circles.

Through most of its history, only one bridge crossed Venice’s Grand Canal: the Rialto, built of stone in 1591 to replace a wooden span. Today there are three others: the Accademia, Scalzi and Calatrava. The sole bridge connecting Venice to the mainland, Ponte della Libertà, was built in 1933.

Smaller but intriguing bridges include three named Ponte delle Tette (Bridge of the Tits). The best known is  located in the former red light district where prostitutes once attracted customers by baring their breasts. The Ponte dei Pugni (Bridge of Punches) leads to the spot where men faced off in violent clashes. The Ponte dei Sospiri (Bridge of Sighs) is named for the sad sighs of convicts catching a last glimpse of Venice before entering its grim prison.

If your feet or energy give out, other options for getting around include the vaporetto (public ferry); traghetto (inexpensive gondola that goes back and forth across a canal); taxi acquei or water taxi (fast, sleek and very expensive) and the classic gondola (so jammed with tourists snapping selfies these days that they’re anything but romantic).

To get the most out of your stay, I recommend a professional guide. Cristina Gregorin, a cultural heritage expert with Slow Venice and a font of knowledge of La Serenissima’s history, arts and varied delights, did more than lead us through the Venetian labyrinth. She brought back to vivid life the men and women who once walked its calle and sailed its laguna, people a historian once described as “magnificent in themselves.”

Crosera — a crossing of a calle

Fontego or Fondaco -– a merchant’s home and warehouse