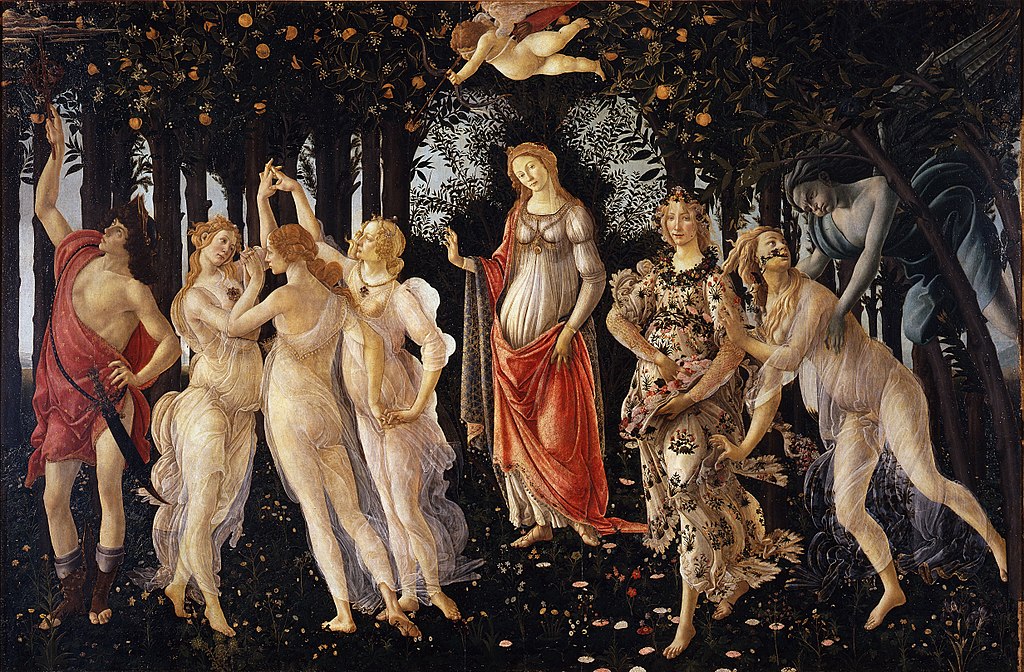 In English the most eagerly awaited of seasons “springs” to life with blunt urgency. In Italian la primavera blossoms into four elegant syllables. My etymological dictionary traces primavera back to radici indoeuropee (Indo-European roots): prima for “before” and vas for ardente, splendente (burning, shining), which evolved into a word for “summer.” And so Spring is simply the season “before summer.” What a season it is!

An Italian word-lovers’ website waxes poetic on its glories, hailing la primavera as “l’inizio di splendore, per tutto, per tutti” (the beginning of splendor, for everything, for everyone). I cieli freddi spazzati dal vento (the cold, windblown skies) make room for un caldo sole (a hot sun). La terra (the land) awakens from its letargo (hibernation) and prepares to sollevare un manto smeraldino (push up a green mantle). People eagerly shed their heavy clothes to feel the sun on their skin — an epidermico piacere (epidermal pleasure).  It’s also the perfect time to enjoy pasta primavera (pasta made with fresh vegetables).

The artist Sandro Botticelli captured the glories of the season in the painting known as La Primavera, one of the grandi capolavori del Rinascimento (great masterpieces of the Renaissance), displayed in the Uffizi in Florence. Completed around 1482, it depicts a group of mythological figures in un ombroso boschetto (a shady glen), under una sorta di semi-cupola di aranci (a sort of half-dome of orange trees) against un cielo azzurrino (a light blue sky). At the center stands Venere (Venus), simbolo neoplatonico dell’amore più elevato (neoplatonic symbol of the most elevated love).

Another Italian captured the essence of Spring in music. Antonio Vivaldi dedicated the first movement of his famed violin concerti Le quattro stagioni (The Four Seasons) to La Primavera and wrote poems to express the sounds of each season. The sonnet on Spring begins: “Giunt’ è la Primavera e festosetti / La Salutan gl’ Augei con lieto canto” (Springtime is upon us. The birds celebrate her return with festive song). Click here to listen.

Writers, inventors and many others have adopted primavera as the name for poems, songs, software programs, political parties, soccer competitions and political upheavals, such as La Primavera di Praga (the Prague Spring). In honor of the season’s inspiring spirit, I pass along some advice from Italian wordsmiths:

As the new energy of birth and creation (la nuova energia di nascita e creazione) flows within and around you, don’t let it slip away (non farsela sfuggire)! It will take a year for this most sacred and tender moment of the eternal cycle of the seasons (momento più sacro e tenero dell’immortale ciclo delle stagioni) to return with its chance for redemption and regeneration (l’occasione del riscatto e della palingenesi).