White as Snow in the Italian Language 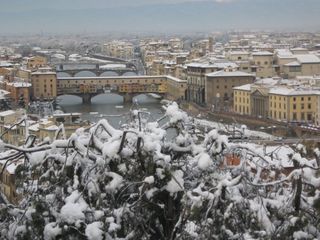 When snow turns the mountain tops white (imbianca le cime delle montagne), Italians often take una settimana bianca (a white week or winter holiday). Many like to go to the mountains (andare in montagna) to ski (sciare), snowboard (fare snowboard) or go mountain-climbing (fare alpinismo). Personally I prefer to stay snug and warm in a stazione invernale (ski resort) with un bianchino (a glass of white wine) and enjoy il panorama (the view).

Yet even when the snow melts, in Italian bianco is never out of season or style. You can find bianchezza (whiteness) in the white of the eye (il bianco dell’occhio), the white of the egg (il bianco dell’uovo), or the universally beloved fairy tale “Snow White and the Seven Dwarves” (Biancaneve e i sette nani). If you’re frightened, you may sbianca or turn white as a sheet (bianco come un cencio). A terrible shock can even turn a person’s hair white (far diventare i capelli bianchi).

Sheets or linens are called biancheria, while biancheria intima refers to lingerie. Something off-white is biancastro or bianco sporco. which is different from whitish (bianchiccio) or white-washed (bianchetto). If you feel under the weather, the best advice is mangiare in bianco. “Eating white” means choosing bland foods such as bread, pasta and rice and avoiding fried or difficult-to-digest dishes.

Bianco also can convey blankness or an absence of something. Un foglio in bianco is a blank sheet of paper; un assegno in bianco, a blank check. Un matrimonio bianco describes an unconsummated and presumably loveless marriage. If you toss and turn all night long, you pass una notte in bianco, a night without sleep.

If something comes out of the nowhere—out of the blue, we’d say in English—Italians describe it as di punto in bianco (a military expression for shooting without aiming properly). Ending up nowhere translates as andare in bianco (going into white). Workers who die because of unsafe conditions on the job suffer morti bianche (white deaths).

A free hand, carte blanche in French, becomes carta bianca in Italian. A red-hot controversy in English is una polemica al calor bianco (to the white heat) in Italian, sometimes caused by people who see everything as black or white (o tutto bianco o tutto nero).

“Anche le mucche nere danno il latte bianco” — a Tuscan proverb that translates literally as “black cows also produce white milk,” meaning that we are all equal, regardless of appearance.

Bianchina — a classic Italian car from the 1950s