“Z” Is Called “Zeta” in the Italian Language 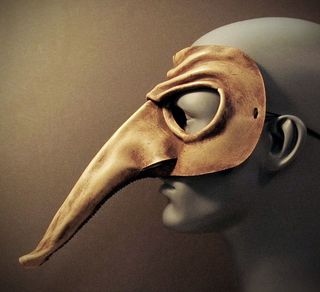 Of all the letters of the alphabet, z (zeta in italiano) may be the most zany–an English word derived from Zanni, a form of Giovanni or Gianni (John) and the name of a classic character in La Commedia dell’Arte (comedy of the “art” or profession of acting). In this centuries-old form of street theatre, buffoonish Zanni, wearing a mask like the one above, kept trying, rather lamely, to pull off la zannata (a clown’s trickery).

The very last word under the very last letter in my Italian dizionario makes me smile (mi fa sorridere): zuzzurullone (or zuzzerellone), which once translated as tomboy but now applies to any playful person–someone likely to whistle (zirlare) and frolic (zurlare).

Italian imported two "z" words–zanna and zampa–from the Germanic tribes who invaded the peninsula more than a thousand years ago.  Zanna (tooth in German) translates in Italian as fang or tusk, as in le zanne del cinghiale (the boar’s tusk).

Zampa (foot in German) means paw or claw in Italian, as in le zampe del gatto (the cat’s paws) or camminare a quattro zampe (walk on all fours). Italians call bell-bottomed pants pantaloni a zampa d’elefante (elephant-foot pants). Those of us who wore them in the seventies now find ourselves with zampe di gallina (crow’s feet).

Zeta can be as sweet as a zolletta di zucchero (cube of sugar), as spicy as zenzero (ginger), as tasty as zampone (pig’s trotter, a traditional New Year’s dish), or as prim as an old maid (zita, zitella, zitellona). But it’s a mischievous enough zolfino (spitfire) to call a fussy old bachelor a zitellone and a dandy or fop a zerbinotto (derived from zerbino for doormat).

Quite a few colorful insults start with the last letter of the alphabet. A zotico is a clumsy, uncouth, stupid, clownish, churlish dunce. Someone exhibiting zoticaggine or zotichezza (boorishness) qualifies as a zoticone or a zoccolone (from zoccolo, for wooden shoe or clog). A blockhead can be dismissed as a zuccone (literally big pumpkin) or zucca vuota (empty pumpkin). A zavorra is a worthless piece of garbage who non conta uno zero (doesn’t add up to zero). Something filthy or sordid is zozzo, while a zozzone is a scruffy, untidy slob.

If you use these words too freely, someone may caution, “Sta zitto!” (“Hush! Keep quiet!”). You don’t have to be zitto-zitto (quiet as a mouse), but you don’t want to spargere zizzania (literally spread weeds, or start trouble) or end up in a zuffa (brawl, scuffle)!

andare a zonzo –- wander about

Dianne Hales is the author of LA BELLA LINGUA: My Love Affair with Italian, the World's Most Enchanting Language and MONA LISA: A Life Discovered

Click below to find out why il cuore (the heart) is uno zingaro (a gypsy):